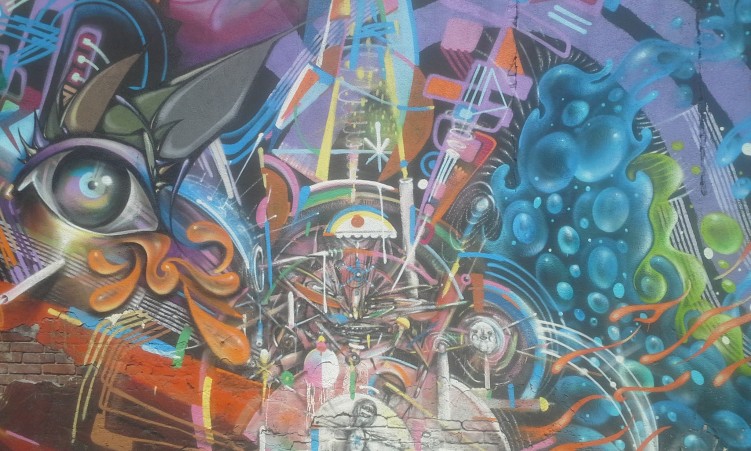 11 East LA Murals that Deserve More than a Drive-By

Walking around East LA, we can get used to seeing paintings on every corner of every building, but between the menus of the day and price lists for mani-pedis, we can look right past the icons of Latino art history on the store where we buy our shoes — literally.

The East Los Streetscapers, David Botello, and Sand One are just some of the names you’ll see on the many asombroso murals around East Los. Come ride with me on a review of the history on our walls. Baila, baila! This mural, under the Payless sign, dances right off the wall. It’s so full of life and song, it looks like it’s moving! Checkout the blur-effect of the one dude’s swinging arm as he shines his shoe. These slices of life are both cozy and more full of happiness than a Pharrell song. Musicians play as a daughter embraces her mother and a man and a bride dance what looks like the money dance, dollars trailing from her hand. You can hear the corrido in the voices of all the vibrant colors and sweeping images. 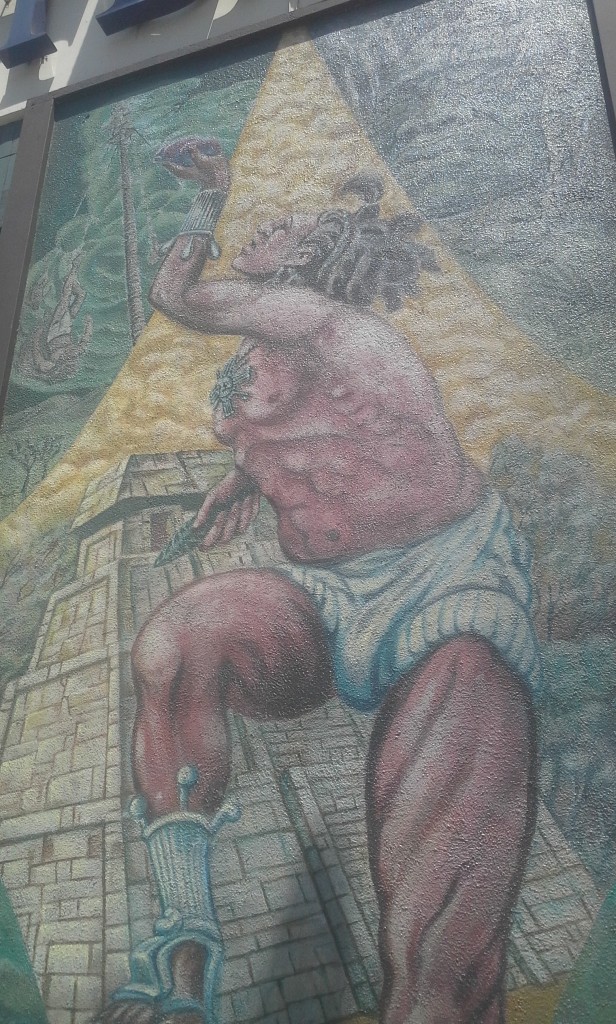 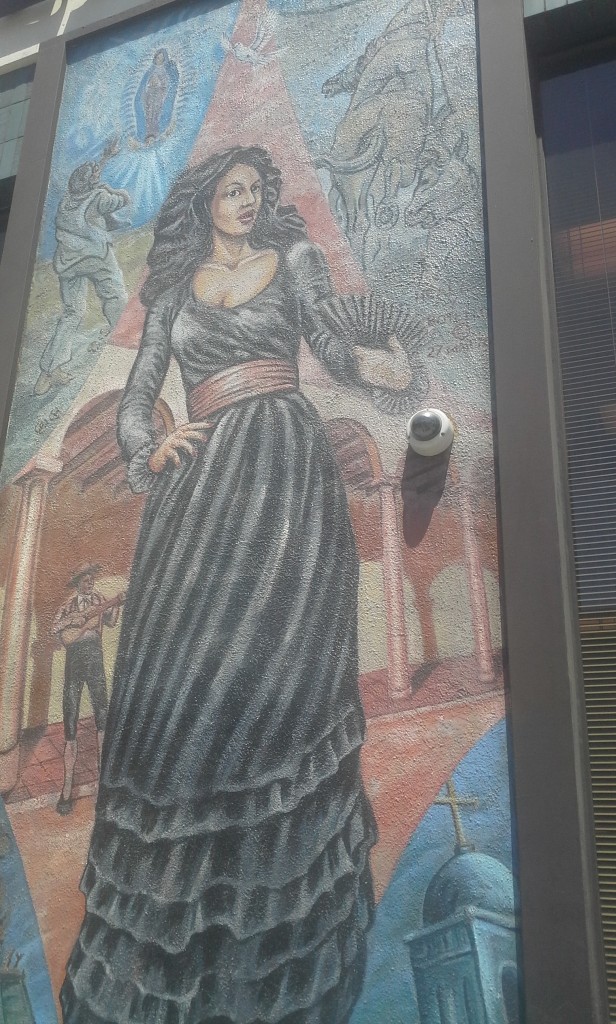 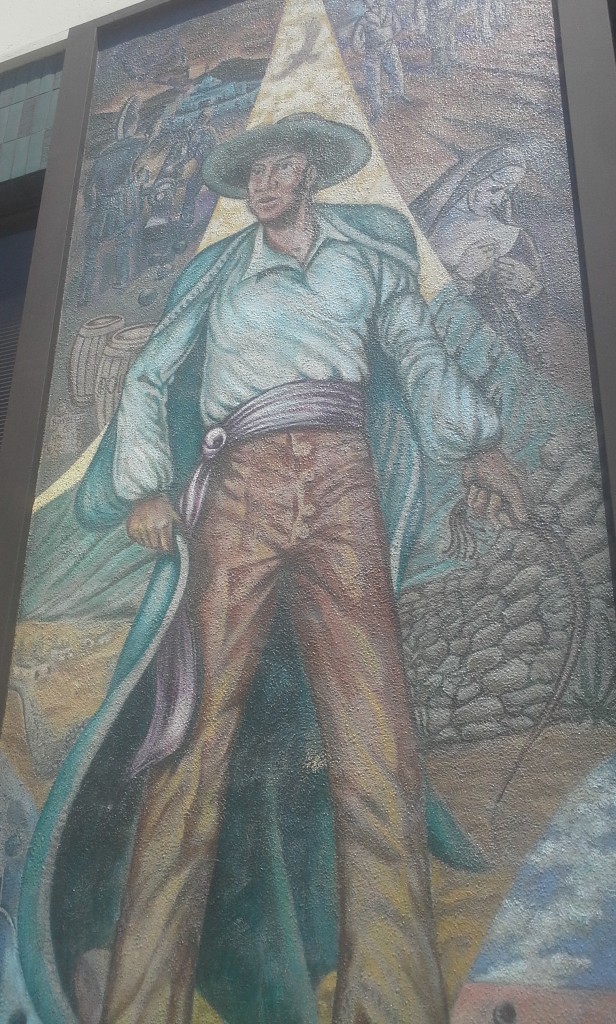 This was the first mural by the East Los Streetscapers, panels that map the history of Chicanos (a historia which gets leap frogged over in certain tellings of the birth of the U.S. ). Behind each historic figure are slices of life: building the missions, taming the land, oh, right, the systematic suppression of the indigenous peoples! The main figures, like the señorita in black, look like they’ve got enough style and attitude for 10 Bomb Squads. The most valuable stash of this bank may very well be on its walls!

Resurrection of the Green Planet, Ernesto de la Loza (1991) At the corner of Breed and Cesar Chavez In the center of this image there’s an Earth Mother, looking like an abuelita, giving her nieta a head massage, radiating light like la Virgen de Guadalupe. She is surrounded by mythical figures, including a half naked, 1-breasted dancer with hair crow feathers or black sun beams. On the other side, a woman pours out a river. Apparently, the rebirth of the Earth depends on mujeres. No doubt. 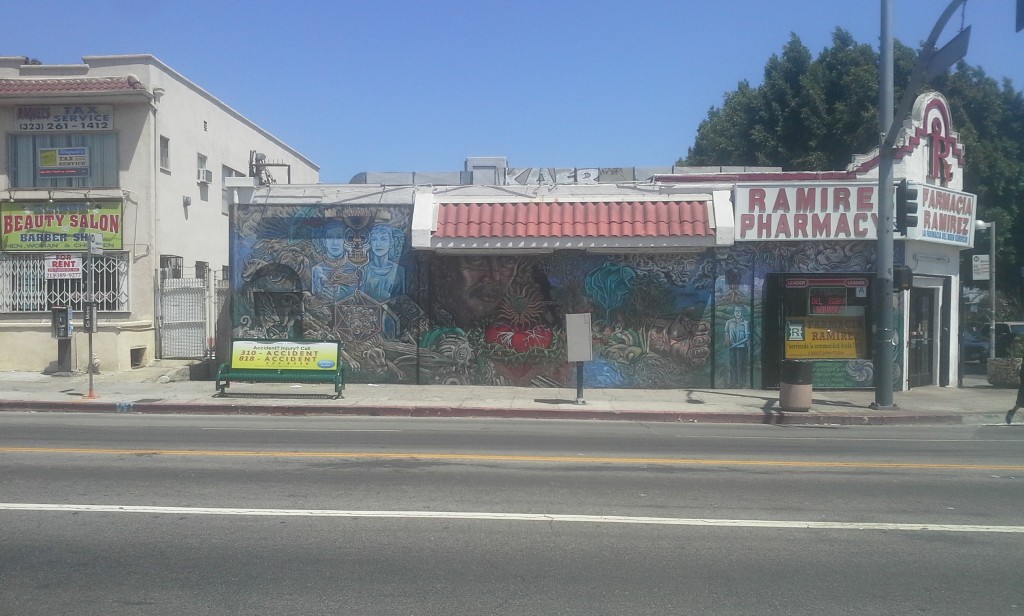 I want to buy my Nasonex here! Mind blowingly cool – Louder than “El Amor” del Bambino – this mural explodes with images of eternal love: Christian (Jesus and el Sagradeo Corazon) and indigenous religious icons on the walls of a pharmacy. As with many of these murals, nature isn’t all daisies and roses – but a thing of vines and brambles that wraps up past and present.

Okay, so it’s not really in East LA – but this mural — right in Olvera Street, the birthplace of LA — is EPIC and was hidden for a long time. The mural basically saco el dedo at the colonials who were crucifying indigenous culture. Classic Siqueiros – obviously inspiring the Botellos and the East Los Streetscapers! Something tells me this was one of those cases where someone hired a world-famous artist without having any idea what his work represented. The mural was literally whitewashed and only recently rediscovered and restored.
Una Trenza: Many artists/ Self Help Graphics (2012) On the walls of Self Help Graphics at the corner of 1st and Anderson.

This mural offers a patchwork of images by a collection of artists. My eye lingered on two sections. In one a boy with his future glowing on his face looks off into the neighborhood, a beam of light showing the ray of his sight. It’s as if his way at looking at la vecina lights up the rows of homes. In the other, you can see the cute doe-eyed work of muralist Sand One, who we’ll be interviewing for The Siren! Her characters always look to me like Latina anime. But more on her work later. 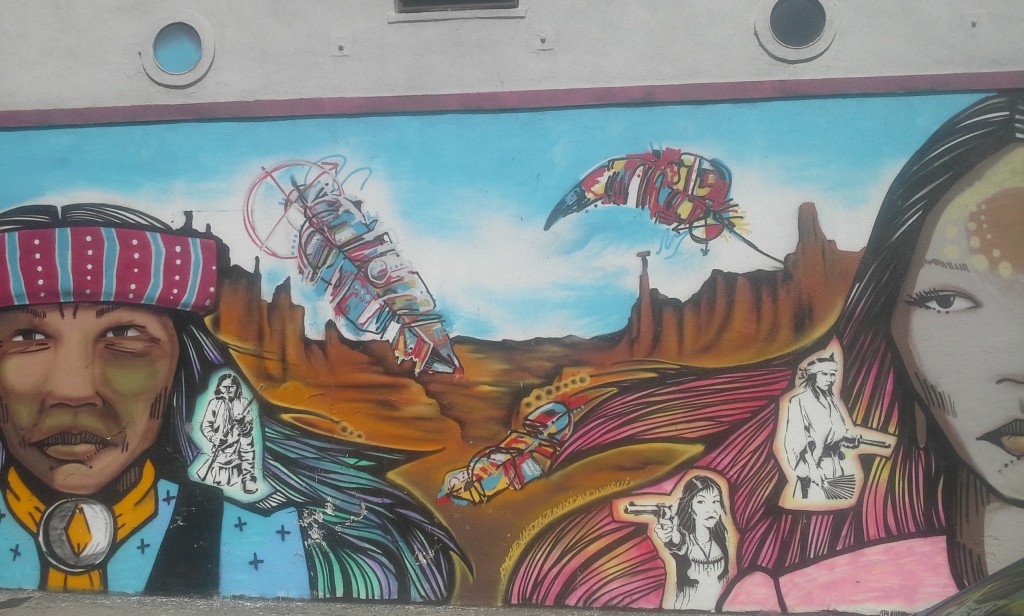 Angels and Apaches is part of a stretch of amazing murals on the adjacent wall of the Self Help Graphics building. These native American faces staring you down in East LA say, “We are Los Angeles.” Check out those feathers — no fluffy angel feathers — these catch fire, explode off the wall. Two figures stare out at you, one in traditional outfit, one contemporary. He’s a figure out of LA history, she could be sitting next to you in Trigonometry. 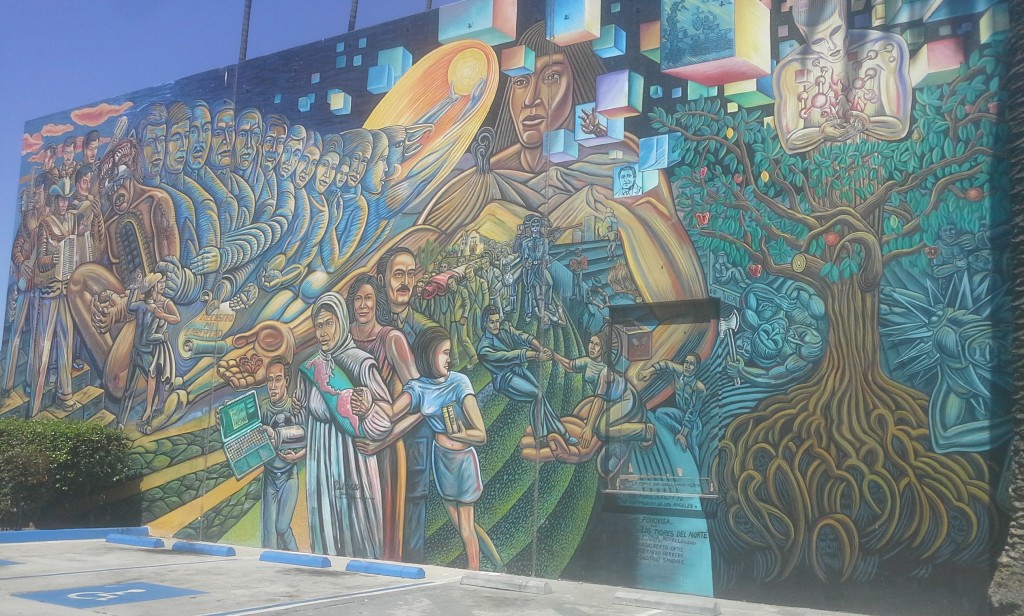 This mural is Surreal – like Dali crossed with Siqueiros. Like many of the others, this mural presents an individual story wrapped up in a history of political conflict. In the center, there’s a family of immigrants with some mobile electronics and books in hand — the tools of crossing all sorts of borders today. To one side Civil Rights leaders intermingle with Native American spirits and what looks like a shaman; to the other side, a tree of life hiding faces in its leaves. In the center, scenes of unrest, as a skull-faced policeman stands by a procession carrying one of the fallen. We spent a week on this in art class at EastLos but could’ve spent a whole year exploring it! Murals tell our history and celebrate our heroes. This fantástico four includes: Cesar Chavez, Emilano Zapata, Pancho Villa, and Catinflas (comic actor, Mario Moreno) flanked by an indigenous warrior and what looks more like a Vegas showgirl. You probably know about Chavez and Pancho Villa, but remember Zapata was a leader in the peasants in the Mexican revolution. Catinflas, who’s been called the Mexican Charlie Chaplin, likewise played peasants, the little guy. So these four iconic men offer 4 very different ways to make some political noise for people without voices of their own.

This is probably the most famous of the Estrada Court murals – Che levels an accusatory Uncle Sam finger at us while his message – in all its funky fonts – challenges discrimination in the name of demographics.

A boy rides a tire swing about to fly right off the wall, surrounded by visions of airplanes (from paper ones to jets) and spaceships and mythological dreams. In signature fashion,one of the most prolific muralists of East LA presents visions of hope to peoples living in some of the poorest neighborhoods, showing that walls cannot contain the spirit of a people.