The East LA Classic is more than just a homecoming game…

To some “The Classic” is just the homecoming football game for Garfield and Roosevelt High Schools, but to others It’s more than just two schools, two neighborhoods, two very close neighborhoods. It’s two families, it’s a mix-up of everything, and in my house, it’s a civil war come homecoming week. Growing up I knew what side I represented, or at least I thought so. That’s because my pops was a Roosevelt Rough Rider and represented his alma mater to the fullest. My mother on the other hand kept quiet… but as I found out when I got older, she was a Garfield Bulldog! 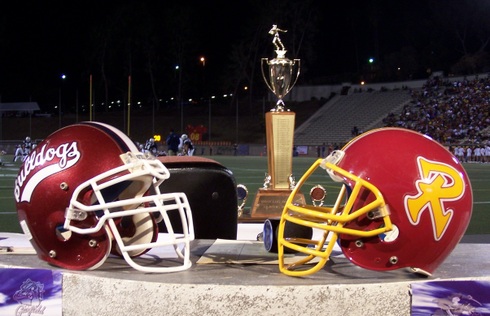 Now this could be a no no in the neighborhood, but we are not alone. Seems like a lot of Rough Riders go after Bulldogs or vice-versa. I’m not sure when how people are able get with members of the rival school, because whoever wins this annual game gets bragging rights for the year, and that’s serious business. The bragging goes all the way back to kids in elementary, middle school celebrating their future school. During homecoming weekend both schools set up security posts at schools guarding their beloved murals, statues and mascot logos for fear of being vandalized by the rival team.

The Classic is one of the most highly acclaimed and attended high-school football games west of the Mississippi. It’s taken place since 1925, the year of Garfield’s establishment, with the exception of a span from 1939 to 1948 due to the Great Depression and World War II. It brings out alumni from all parts of the world, dividing up couples, brothers, sisters, neighbors—you have to pledge allegiance to one side or the other! It usually attracts crowds in excess of 25,000 people, and it’s been held at on the campus of East L.A College for much of its existence. The event was held at the L.A Coliseum for a few years before returning to its original location at Weingart Stadium.

Now our neighborhood has added two or three much needed high schools, so the pride and rivalry has toned down—but it’s in the blood and it will live forever. It’s an Eastside thing and we love it.

Photo by Alessandro Prada, used under a Creative Commons license.